The chapter is divided into following sub-headings. All the references are omitted. The readers are advised to see the original book cUlum al-Qur'ân for the references.

Why Is It Important?

The Qur'ân explained by the Qur'ân

The Qur'ân explained by the Prophet

Introduction to the Quran

Introduction to the Quran

The Quran is the Muslim scripture, that is to say the scripture of the followers of Islam. Islam is the religion established among the Arabs - a people until then largely confined to the Arabian Peninsula - by the Prophet Muhammad in the early seventh century.

The Quran was revealed to Prophet Muhammad by God through the agency of the angel Gabriel; this took place partly in Mecca, his hometown, and partly in Medina, where he succeeded in creating a state in an otherwise stateless tribal society. The message was revealed in Arabic, the language of the people it was initially addressed to, even though the message was ultimately for the whole of humanity.

The Quran specifically mentions that Muhammad was the messenger to the whole of mankind, and that he is the last messenger to be sent. Thus, the Quran is the final message that supersedes and reiterates the basic religion God ordained for the Jews and the Christians, as well as the Muslims. Today, the total number of Muslims in the world is over a billion, making up almost a fifth of the world’s population. For all Muslim communities, whatever their language and wherever they live, the Quran is their scripture.

Read more: Introduction to the Quran

Muslims believe that the Quran is the literal speech of Allah, revealed to Prophet Muhammad (peace be upon him) through the 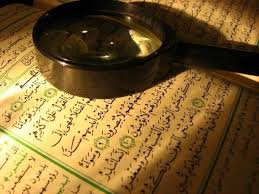 Archangel Gabriel. The Quran is recited as an act of worship in the original Arabic worldwide by Muslims in prayers and is believed by Muslims to be miraculous.

The Quran was revealed over 1400 years ago. Its revelation spanned the 23 year length of the Prophethood of Muhammad (peace be upon him) and addressed pertinent issues of the day which remain relevant even today.

The Quran is believed by Muslims to be the final revealed scripture for the guidance of mankind; other scriptures that Muslims believe in include: the Psalms of David, the Torah of Moses, and the revelation sent to Jesus (peace be upon them). The Quran addresses a multitude of subjects; some of the main topics can be summarized as follows:

Read more: About The Quran

The calls of The Most Merciful